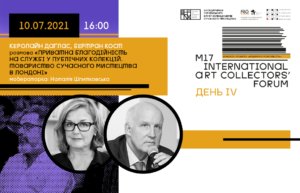 On July 10, 2021, at 16:00 event #11 in the M17 CAC, on the ІV Day of the M17 International Art Collectors’ Forum, there will be “Private Philanthropy in Service to Public Collections. Contemporary Art Society in London” talk held by Caroline Douglas (Great Britain) and Bertrand Coste (France).

Languages of the event: Ukrainian and English

Caroline Douglas, Director of the Contemporary Art Society (CAS) in London, a charity that purchases important works of art to place in public collections across the UK. She previously headed the Arts Council Collection (2006–2013), curating solo shows with artists such as Bridget Riley, Anish Kapoor, and Gary Hume. As a curator of the Visual Arts Department of the British Council (from the early 1990s to 2006), she worked on touring exhibitions in Europe and India, as well as leading on purchases for the collection.

Bertrand Coste – Golden Patron, member of the Development Council of the Contemporary Art Society in London. Head of the Search Foundation, he finances the research group of the Institute of Archeology of the National Academy of Sciences of Ukraine in the field of Eneolithic research in Eastern Europe, which has brought Ukrainian archaeology to the world level. Descendant and follower of the traditions of the de Menil family, who were ardent supporters and advocates of modern art.

Natalia Shpytkovska, Director of the M17 CAC, art consultant, a researcher at the Modern Art Research Institute of the National Academy of Arts of Ukraine, head of the project An Open Opportunity.