On July 8, 2021, at 13:00 in the M17 CAC, on the II Day of the M17 International Art Collectors’ Forum, there will be a live broadcast of the Oxbridge tutor Edward Clarke’s lecture “Oxford’s Ashmolean Museum. The Oldest Founded by Collectors Museum”.

Languages of the event: Ukrainian and English
Event format: live broadcast organized in the M17 CAC 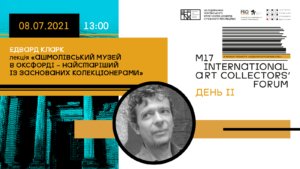 Edward Clarke is a Ph.D., an art critic, a poet, and a professor of art history, architecture, and English literature at several colleges including the Department for Continuing Education at Oxford University. Nowadays, another book by Edward Clarke is forthcoming. “The Secret Mind of Art” will present the outcome of the exploration of 12 classical works of religious art. The launch of the book is scheduled for 2023 at Lion Books.

“Private collections served as the basis for the Ashmolean Museum of Art and Archeology.” The museum building is located in the center of Oxford. It was designed by Charles Robert Cockerell and completed in the XIX century. What is interesting is that the columns that became part of the portico in front of the building’s facade were excavated from the Temple of Apollo in Athens by a working party led by the same Mr. Cockerell, who also practiced writing, engraving, and archeology.

Edward Clarke gave a lecture about the lives of the primary collectors, the history of the exhibits, and the architectural interests of the Ashmolean Museum.