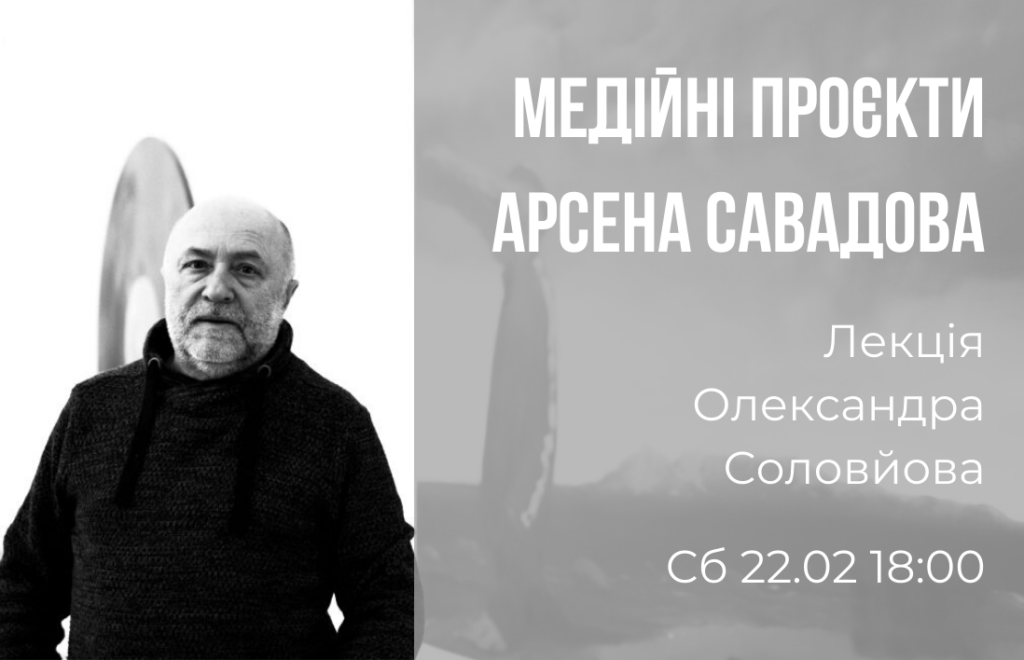 At 18:00 we invite you to a lecture by Olexander Solovyov «Media projects of Arsen Savadov. Stage Photography and Video ».

Olexander Solovyov is one of the most respected Ukrainian curators and an art critic.

He was a member of the squad “Parkomuna”. Art critic Alexei Titarenko in his book “Art of Ukraine of the XX Century” calls Alexander Solovyov the “godfather” of the Ukrainian “new wave” in visual arts, noting his contribution as a leader of ideas directly. It was Soloviev who consistently defended the birth of the art of the “new era” in 1987. He owns the largest array of texts that analyze Ukrainian art of the late 80’s – early 90’s (and not only), and place it in the context of history.

With his support, together with Tiberius Silvashi, the well-known “Sednivsky plein airs” (1988, 1989, 1991) were curated, which significantly influenced the formation of the artistic environment and the renewal of artistic language of Ukrainian artists. Participants of the plein air were selected personally by Silvashi and Solovyov.

On the curatorial account of Alexander Solovyov, among other things, the exhibition “Still” in 1992, which took place in the building of CAC M17 (at the time – the exhibition space of the Union of Artists), which stated the completion of the stormy stage of the “new wave” – ​​”trans-avant-garde storm” transition to the quiet phase; also a generalized retrospective of Independent Mystetskiy Arsenal (2011) – an overview of the 20 years of Ukrainian contemporary art development since 1991.

In 2014 he was a part of the curatorial group of the project “Foreboding. Ukrainian Art Today, ”and in 2015 was the curator and jury member of the UK / raine Ukrainian and British Young Artists Exhibition. Both projects took place at Saatchi Gallery in London.

He has supervised the projects of Ukrainian Pavilion at Venice Biennale three times.

The lecture will be held as part of a parallel program for the exhibition of Arsen Savadov’s Voice of Love.

Ticket price:
100 UAH for adults,
70 UAH for students and seniors.
NSAU members and ATO members have the right of free admission if they have the appropriate certificates

"Collective Red": the screening and meeting with the director