Perhaps the most famous collector and gallery owner in history, Margaret “Peggy” Guggenheim (1898-1979), was the granddaughter of the famous mining magnate Mayer Guggenheim, the ancestor of the family. Her father, Benjamin Guggenheim, was the fifth son in the family and one of those who continued the family business; but he gained the greatest fame by dying aboard the Titanic in 1912 (a scene in a James Cameron film, later deleted, based on eyewitness accounts) was dedicated to him. In 1919, after reaching the age of 21, Peggy inherited her parents’ fortune and immediately embarked on a very expensive trip to the United States. We find in her memoirs a funny mention belonging to this period: 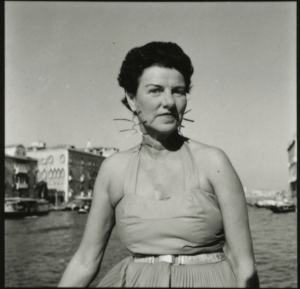 “After a while, Margaret Anderson came to me and asked if I would agree to give some money to The Little Review and present it to my uncle [Solomon Guggenheim]. She said that if wars could be prevented, it was only through donations to the arts. Being young and naive, I believed that I could postpone the next world war for a few years if I gave $ 500 to The Little Review. I sent Margaret to my uncle, who was handing out fur coats, and if she didn’t get five hundred dollars from him (I don’t remember exactly now), I probably got a fur coat.”

Soon our heroine got a job as a clerk in the avant-garde bookstore of her cousin, where instead of a salary she had a 10 percent discount on the purchase of books and a bunch of interesting acquaintances. This determined Peggy’s further tastes in art and the environment. The bookstore presented, among other things, an acquaintance with the future first husband – Dadaist sculptor and writer Lawrence Vale – and the first abstract painting, which was the work of Georgia O’Keefe.

In 1920, Peggy went to Europe to see as many paintings as possible. According to her own recollections, for the sake of some one canvas stored somewhere in a tiny town, she was ready to cover great distances. At that time, her heart still belonged more to the old masters, especially the Italian Renaissance. Peggy recalls reading one of the most authoritative experts of the era, Bernard Berenson, from her friend’s light hand:

“He [a friend] said that I had no reason to understand Berenson, and this statement had an effect. I immediately purchased and swallowed seven volumes of outstanding criticism. After that, I tried all my life to look at everything from the point of view of the seven provisions of Berenson. If I managed to find a painting with tactile value, I was delighted. “

The short trip turned into a 20-year stay in your favorite Paris. Peggy married Lawrence Vale and became a regular member of the art community with him. She befriended almost all the most prominent modernist artists, including Marcel Duchamp, a man who would

have a significant impact on her work as a collector and gallery owner.

During numerous quarrels with the energetic and inflammatory Lawrence, she, feeling inferior along with his creative power, often reproached her husband for lack of money: they say that all the money they spend belongs to her. Lawrence replied that Peggy’s stay in the bohemian world was a gift of destiny, and since she could offer nothing more than money to the world, it was her duty to share her money with “those geniuses with whom [she] it was allowed to communicate. ” Perhaps it also played a role in favoring Peggy Guggenheim’s avid patronage.

A decade later, when she married Lawrence and many other novels in the past, and the love affair with writer and teacher Douglas Harman was coming to an end, there was a turning point in Peggy’s story.

“When I realized that our life with Harman was over, I was deprived of any occupation – until fifteen years ago, I was just doing what was someone’s wife. The problem was solved by my friend Peggy Waldman, who invited me to open my own publishing house or gallery. “

The choice fell on the gallery, and its specificity was determined again by the circle of acquaintances. The Guggenheim Jeune Gallery opened its doors in London in January 1938. That year, Marcel Duchamp introduced Peggy to Jean Cocteau and it was decided that the exhibition of his works would open a new space. Actually, the exposition of the first exhibition was designed by Duchamp. For Peggy herself, close “communication” with the art of abstractionists and surrealists was just beginning.

Peggy wrote that she still didn’t think about collecting at the time. However, she definitely bought at least one work from each exhibition held in the gallery, so as not to offend the artists (because she has not yet acquired good sales skills). Two years after the opening of the gallery, Peggy’s dream of building a museum of contemporary art. This dream will form the basis of the famous Peggy Guggenheim collection.

During the planning of the first exhibition of the future museum, Herbert Reed compiled a list of paintings for her (edited by Marcel Duchamp, Nellie van Dusburg – the wife of the famous architect and abstract artist Theo van Dusburg, and Peggy herself). Most of the paintings were planned to be borrowed and brought to London from Paris. However, World War II forced the initiators to abandon priority plans. Peggy had to stay in France. Together with Nellie van Dusburg, they came up with a plan to create a colony for artists during the war: Peggy would allocate funds for their maintenance, and they, in turn, would give her paintings for the future museum. This plan also did not come true. However, before her evacuation to America in 1941, Peggy set herself the goal of purchasing all of Herbert Reed’s works by buying a painting for the day, which she did. Even on the day Hitler entered Norway. This is how the collection was collected, which included works by Constantin Brancusi, Salvador Dali, Fernand Leger, Alberto Giacometti, Max Ernst (Peggy’s second official husband), Pete Modrian, Vasyl Kadinsky, Yves Tangi, Paul Kleet, Rene Magri. The fact that the collection was “ahead of its time” can be judged at least from the fact that it was not officially removed from Nazi-occupied France – the owners refused, claiming the lack of artistic value of the collection. 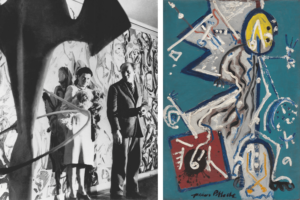 In New York, Peggy opened a new gallery called The Art of This Century Gallery (which operated until 1947), starring Jackson Pollock. After divorcing Max Ernst, who had previously been her main protégé, Peggy completely “dedicated herself” to Pollock, with whom, however, the relationship did not go beyond the format of “patron artist.”

The collection was shown at the Venice Biennale in 1948, when it resumed its work after the war. Peggy’s meeting occupied the Greek pavilion. Some headlines dubbed it the “Noah’s Ark” for European and American art of the first half of the twentieth century. Audiences outside the United States first saw the works of Jackson Pollock, Mark Rothko, Clifford Still. Today, this show is considered a milestone for the entire art world.

Peggy’s passion for art was intertwined with a passion for its creators, which she never hid. It is difficult to understand what or whom she loved more. Peggy had a relationship with many of the artists she supported, as described in detail in the autobiography quoted here.

And another careless touch to the portrait. Describing the difficulties he had to face in wanting to buy Constantine Brancusi’s work, Peggy wrote:

“Lawrence jokingly offered me to marry Brancusi and inherit all his sculptures. I felt the ground in this direction, but very soon I realized that he has other plans in this regard and is not going to make me heir. “ 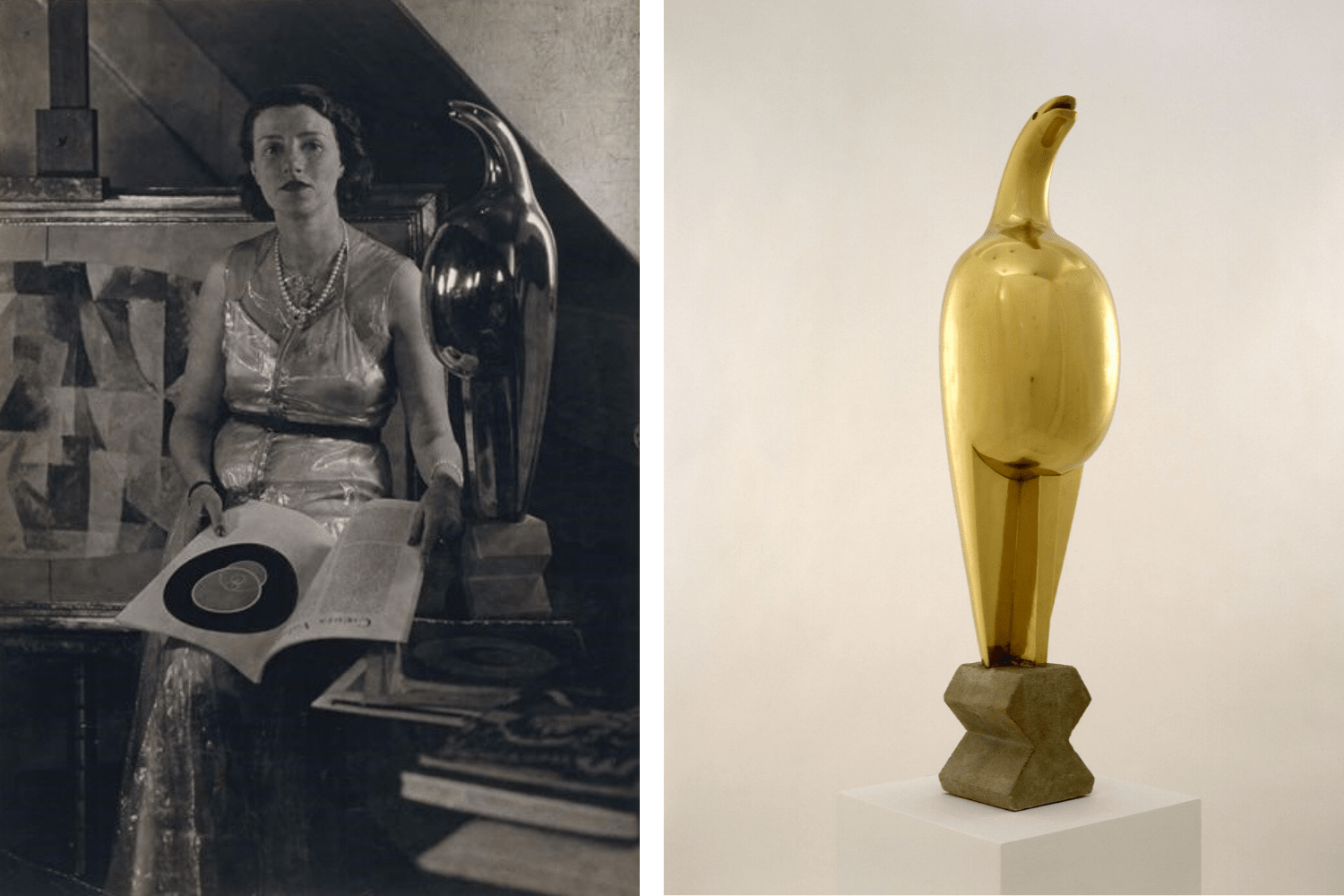